The dominant myth that Americans tell themselves and the world about America is the myth of American exceptionalism.  America is the only nation created as the embodiment of an idea, the idea of equality.  America is a city upon a hill, a beacon to all, the hope of mankind, the greatest democracy on earth, the leader of the free world. America is the only world power not to seek imperial hegemony.  Never mind that none of this is true.  What is true is that America is really exceptional in one deeply important fashion.  It is far and away the most economically unequal of the world’s advanced industrial economies.

The purpose of this blog post is to introduce you, if indeed introduction is necessary, to the measure of economic inequality called the Gini Coefficient.  I do this for two reasons:  First, because I enjoy explaining technical things, and this is my blog, damn it; and Second, because I think it is useful when discussing politics and economics to introduce a measure of precision as a way of getting past anecdote and polemic.  Accordingly, I will first explain what a Gini Coefficient is and then tell you a bit about how nations across the globe differ in their degrees of inequality, as measured by their national Gini Coefficients.

The easiest way to understand a Gini Coefficient is first to understand a Lorenz Curve [both of these, of course, named for the economists who invented them].  Take a look at this diagram, copied from Wikipedia. 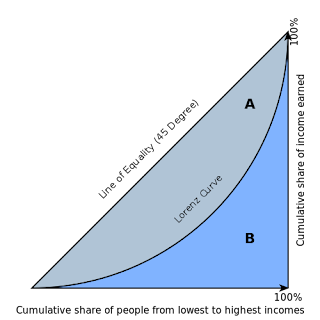 OK, got that?  In the real world, of course, there are no perfectly equal or perfectly unequal nations.  In every nation, the poorest people receive less than their proportionate share of national income and the richest people receive more than their proportionate share.  If you graph that reality, you get a curve that looks something like the curve in the diagram above.  The more closely that curve hugs the equal distribution 45 degree angle line, the more equally income is distributed in the economy.  The more that curve sags and droops, the less equally income is distributed.  So much for Herr Lorenz.

Here are some numbers, income first.  The most equal nations for which the UN has data are Ukraine, Iceland, Slovenia, the Czech Republic, Slovakia, Kazakhstan, Kosovo, Belarus, Finland, and Norway, all with Gini Coefficients in the 25-26 range.  Belgium, Denmark, and the Netherlands are a tad less equal, with Gini Coefficients between 28 and 29.  Germany’s Gini Coefficient is 31.4, Japan’s is 32.1, France’s is 32.3, and Canada comes in at 34, between Sierra Leone and Niger.  A tiny bit less equal is Great Britain, with a Gini Coefficient of 34.1

And wealth?   The United States has the least equal distribution of wealth in the entire world, with a wealth Gini Coefficient of 80.56!  Try if you can to visualize the wealth Lorenz Curve for America.  Four-fifth of the area is above the curve.  Indeed, as Thomas Piketty notes, the poorest one-half of America’s population has collectively wealth of exactly zero!  How is this possible?  Simple, if you aggregate their wealth holdings and subtract their debts, nothing is left.  Graphically, America’s wealth Lorenz Curve does not even make it above the x-axis until the 0.5 point.

An excellent explanation. Thank you.

Yes, indeed. Excellent. And it explains a lot.

I would like to see a correlation of the wealth Gini Coefficient by congressional district (or by the top and lowest 50 counties or so) and 2016 voting results - and voting participation rates (which might be impossible to measure given that millions of absentee and/or provisional ballots were not counted or counted properly).

I think the case for American exceptionalism is firmly based in pop music: not just Living In America by James Brown and They're Coming To America by Neil Diamond but America The beautiful and Gershwin and of course the National Anthem, the best national anthem of all time
I may have overlooked a few standbys like American Girl by Tom Petty and Born In The USA by Springstein but I'm sure you'll all have your favorites to add to my list, because America is just so great

I do indeed. I will editr it. Thank you.

Thanks to Anonymous @3:14pm for clarifying. The sentence puzzled me, too.

More exceptional American tunes:
"We're An American Band," Grand Funk Railroad
"American Woman," The Guess Who (truly exceptional, inasmuch as TGW were from Canada)
"I'm So Bored with the USA," The Clash

When I was in my first year of high school, almost 60 years ago, my Spanish teacher told us not to refer to ourselves as "Americans", because Latin Americans are as "American" as we are. I try not to use the word "American" to refer to U.S. citizens and if I do, it's ironic.

I note that Bruce Springsteen, who is politically aware, titles his song "Born in the USA," not "Born in America". I don't expect much political awareness or even intelligence from most rock or pop singers.

I've lived most of my life in Latin America and we refer to U.S. citizens as "estadounidenses", "norteamericanos", "gringos" or pejoratively, as "yanquis".

Maybe when estadounidenses stop referring to themselves as "Americans", will they begin to have some real political sense of who they are and what their country is about.


Born In The U.S.A. lyrics by Bruce Springsteen

Come back home to the refinery
Hiring man said "son if it was up to me"
Went down to see my V.A. man
He said "son, don't you understand"

I had a brother at Khe Sahn
Fighting off the Viet Cong
They're still there, he's all gone