MUSINGS ON A GAME DRIVE IN THE OKAVANGO DELTA

While bouncing along across country in an open Land Rover on one of the game drives Susie and I took during our trip to Botswana, I found myself reflecting on the striking differences between that experience and the wonderful documentaries I have watched on television over the years about the wild animals of Africa.  These differences in turn served to remind me of the ideological structure of social reality, a subject I have explored in a number of my writings, most prominently in Narrative Time:  The Inherently Perspectival Nature of the Human World.  Since I am still struggling with the technological challenges of uploading my videos from my IPhone to my computer, and thence to this blog, I thought I would fill the void by sharing my musings.  A few introductory words are called for.


Susie and I spent nine days at safari camps in the Okavango Delta, a vast  flood plain in the northwest quadrant of Botswana.  The camps are quite isolated, both from the larger world and from one another.  All of the major African game animals and predators are present, along with an astonishing number of species of birds.  Each day at a safari camp has the same schedule:  A five a.m. wake-up call, breakfast at six, then into the Land Rovers for five hours of game viewing, broken by bush bathroom stops and a brief morning coffee and snacks break in the bush.  Lunch at 11:30, then four hours of rest time [while the animals are taking cover from the noonday sun and are hard to find], high tea [wine and tasty edibles], and back into the Land Rivers for another three hour game drive, capped by "sundowners," which is to say drinks and snacks while standing next to the Land Rover.  More drinks at 7:30, dinner at eight, and to bed to rest up for another game drive the next morning.  A typical tourist plan calls for three days at each of three different camps, with little six seater airplanes to take you from one air strip to the next.  Typically, you arrive at a camp in time for the afternoon drive and leave for the next camp after the morning drive.  Susie and I skipped one afternoon drive, on a day on which we had been in the bush for nine straight hours.  So, nine days, seventeen game drives.  Each tourist is assigned a guide, who drives the Land Rover and finds the game.  He [there are almost no female guides] stays with the tourist for the entire visit to the camp, and receives a personal gratuity at the end of the visit.  Ten years ago, when we went on a Botswana safari, all the guides were white.  Now they are all Batswanan, and the government runs an elaborate training program that prepares Botswana residents for jobs as camp managers and as guides.  The camps are increasingly eco-friendly, with some of them now entirely solar powered.  Basically, each camp is a luxury hotel and restaurant combined with a game viewing program.  Most of the clientele are American [60% these days, down from 80% a few years ago], with the remainder either European or Australian.  The camps are rated at three levels of luxury, with the Premier camps fully as posh as a world class hotel.  This is definitely not a vacation for the masses.


A Land Rover full of tourists does not present to the wild animals a gestalt that is recognizable either as prey or predator, and as a consequence, one can get quite close to the animals without either spooking them or provoking them to attack.  But they really are wild, and the guides issue stern warnings about standing up in the vehicles, talking too loudly, or -- God help us -- getting down out of the vehicles.  On a number of occasions, we drove to within ten or fifteen feet of a lion, who looked at us, sized us up, and went back to whatever he or she was doing.  But had I  stepped out of the Land Rover, I would immediately have been prey, which is to say toast.  At one point, we spotted a huge bull elephant and wanted to trail along after him, but the guide pointed to the secretions dripping from glands on the sides of his face, and said he was "in must," which is to say looking to mate, and hence was very, very dangerous.  We drove on.


The experience of a game drive is nothing at all like the wonderful wildlife documentaries that I so love.  The photographers who make the documentaries spend thousands of hours in the bush with their huge zoom lenses and high powered cameras at the ready, waiting for that magical moment when the cheetah races across the plain after the impala, or the pride of lions take down an African buffalo.  They capture seemingly impossible close-ups of lion cubs playing or hyenas snarling at wild dogs over a kill.  Then they go back to their laboratories and carefully select and edit choice bits from their endless hours of film into fascinating narratives.  They name the animals they film to humanize them and combine footage of many different animals taken on many different days, confident that their audience will not really be able to distinguish one kudu from another, one baby elephant from another.  What they produce is not false.  The pictures are all real.  But it is stylized and organized into stories.  Each documentary has a beginning, a middle, and an end.  Each sequence has a visual frame, with certain events highlighted and centered, others sidelined.  The sequences are narrated, so that our attention as viewers is prepared, focused, and guided to the significant moment in each segment.


A real game drive is nothing at all like that.  The exciting moments, if there are any, occur without warning, and may happen at any time in the drive, even immediately on leaving camp.  Indeed, since the camps are open to the bush, and the animals are free to wander through the camp, the best sightings may occur in camp.  The day we arrived at our second camp, we were a bit late for lunch, so we went directly to the veranda where the meal was served, without first stopping at our luxury "tent."  An elephant in search of marula nuts wandered up to the veranda as we were about to sit down for some food.  Here is a picture of Susie on the deck, with the elephant behind her.  This is not some tame circus elephant, you understand, but a for-real wild elephant. 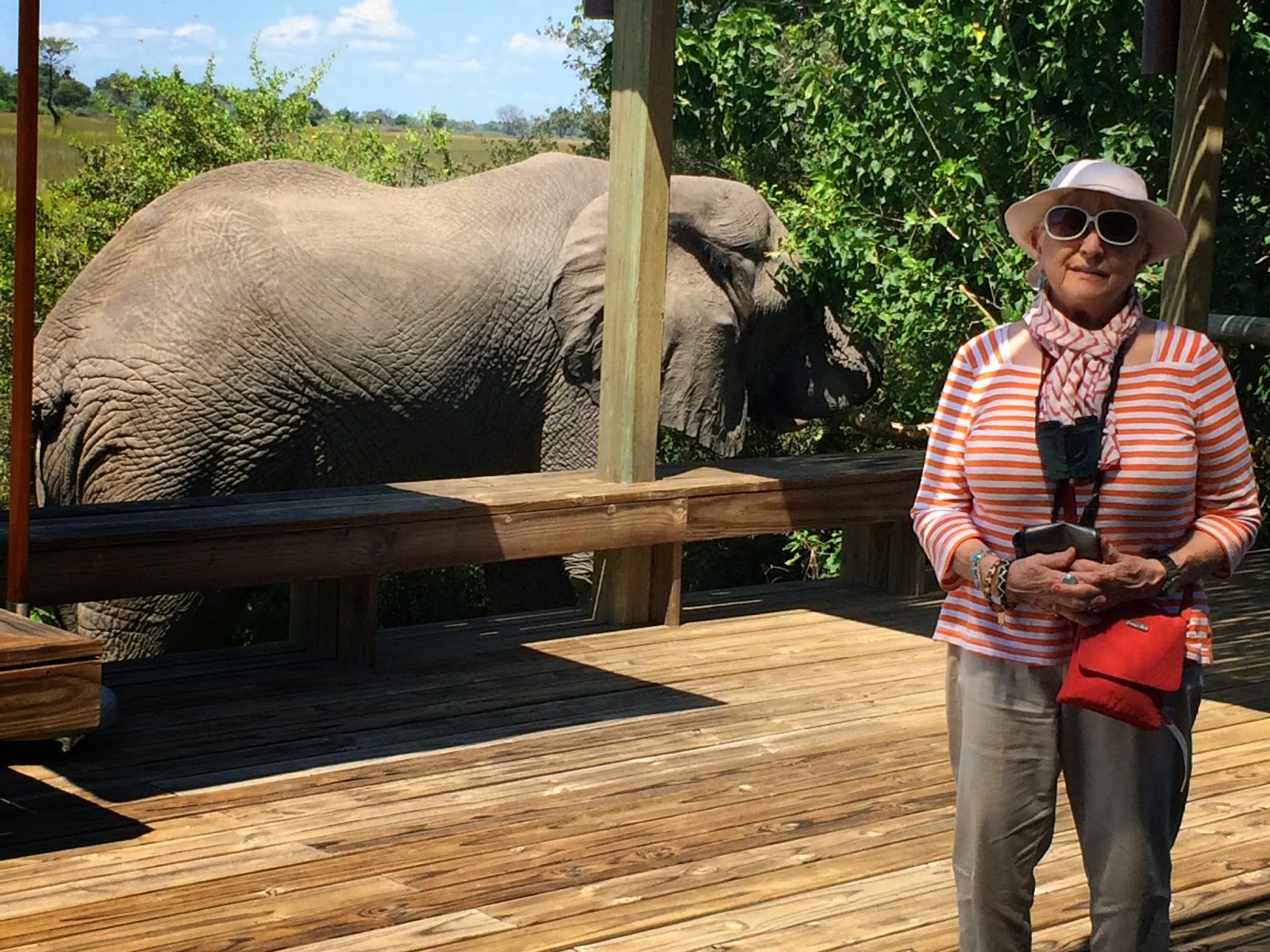 ﻿
Over the course of a five hour game drive, there is a lot of time when nothing at all is happening.  Then, in quick succession, you may see some impala [which are everywhere], a family of wart hogs, a journey of giraffe [isn't that a great word?  A journey of giraffe is a large group of giraffe], and a leopard in a tree.  One day, as we pulled out of camp, we saw a large male lion lying in a field right next to the camp, his huge head raised to catch the early morning sun.
The experience has no narrative structure, no beginning, middle, and end, no crescendo to a climax.  The animals are not acting out a story line, they are simply existing.  After a lion kills a kudu and feeds at it for an hour, she just wanders off under a bush and lies down to sleep.  The experience has no meaning, no moral, no highlights, no dénouements.  It just is.
Unless you subscribe to one or another of the various religious creation narratives, this is the character of the natural world.  It has no narrative structure, no meaning, no heightened moments of special significance.  But the social world is necessarily different.  Because it is a collective human creation, shaped by the ideological rationalizations of those who dominate and by the utopian aspirations of the dominated [to adopt Karl Mannheim's useful categories], it is inherently perspectival, shaped by human meanings.  The natural realm encountered on a game drive has no inherent meaning, but the social world of those who go on the game drives is necessarily fraught with social meanings.  The men and women who work at the safari camps speak English because the rich clients whom they serve are for the most part Americans.  When a young Batswanan woman working at the camp hands a tourist a plate of food or a towel, she touches her forearm with her other hand in a gesture of deference characteristic of the Africans of Southern Africa, a gesture that in traditional Southern African cultures is an expression of respect that the young show to the elderly and the poor to the rich.  One of our guides explained to several of us that the British had brought to the people of Botswana many valuable things as colonialists, including English, which all Batswanan children study from first grade.  Good radical that I am, the speech made my skin crawl, but there I was, taking advantage of, indeed relying on, the ability of my guide and all the other workers at the camp to speak my language.
At this point in my musings, we came upon a male lion feeding on a kudu, and I set about recording the moment on my IPhone.  Even a philosopher can be captivated by Nature, red in tooth and claw.
Posted by Robert Paul Wolff at 8:04 AM

a ton! Including the airfare, which from Chapel Hill to the Okavango Delta involves four planes, the total cost for the two of us was about $16,000! We figured that now we are in our eighties, this was the last hurrah.

I'm a bit puzzled by your apparently sharp distinction between the natural world and the social world. You write that the former has no narrative structure, it just _is_, whereas the latter is shaped by human ideologies and the narrative structures we impose. I agree with you up to this point. But then much of even human behavior looks meaningless to those outside that particular human's internal narrative structure of intent (or "being," if they happen to be meditating or sunbathing). Why should we assume that there is no kudu-narrative kudus use to view the kudu-life, or an elephant-narrative that elephants impose on their own affairs? I imagine that the lion has a pretty good narrative arc of feeling impelled to seek a meal, to crouch in wait, to signal to the herd she is about to hunt (we know now that there are complex signals between predator and prey species, which is why lions can hang out near antelopes without causing undue anxiety until the hunt is about to begin), then to chase, to kill, to eat, to share food with cubs, then - -denouement! -- to nap in the shade. And when animals make complex decisions, such as mourning the loss of a member of the tribe (as elephants do), or when a dog drags his car-struck companion from the busy road to save his life, can we be sure that what the animals are thinking/feeling is all that different from what goes through our own minds and bodies at such times? Wouldn't it make more sense to assume that we are kin as much in emotional responses to the world as in our genes?