SCENES FROM THE SAFARI

While I am struggling with the problem of getting my videos off my cell phone and onto my blog, I thought I would post a few pictures and tell the stories that go with them.  Since, for some bizarre reason, I cannot succeed in  uploading more than one picture in each post, I may do a number of these  To start, here are two wild dogs, members of a pack of eighteen. 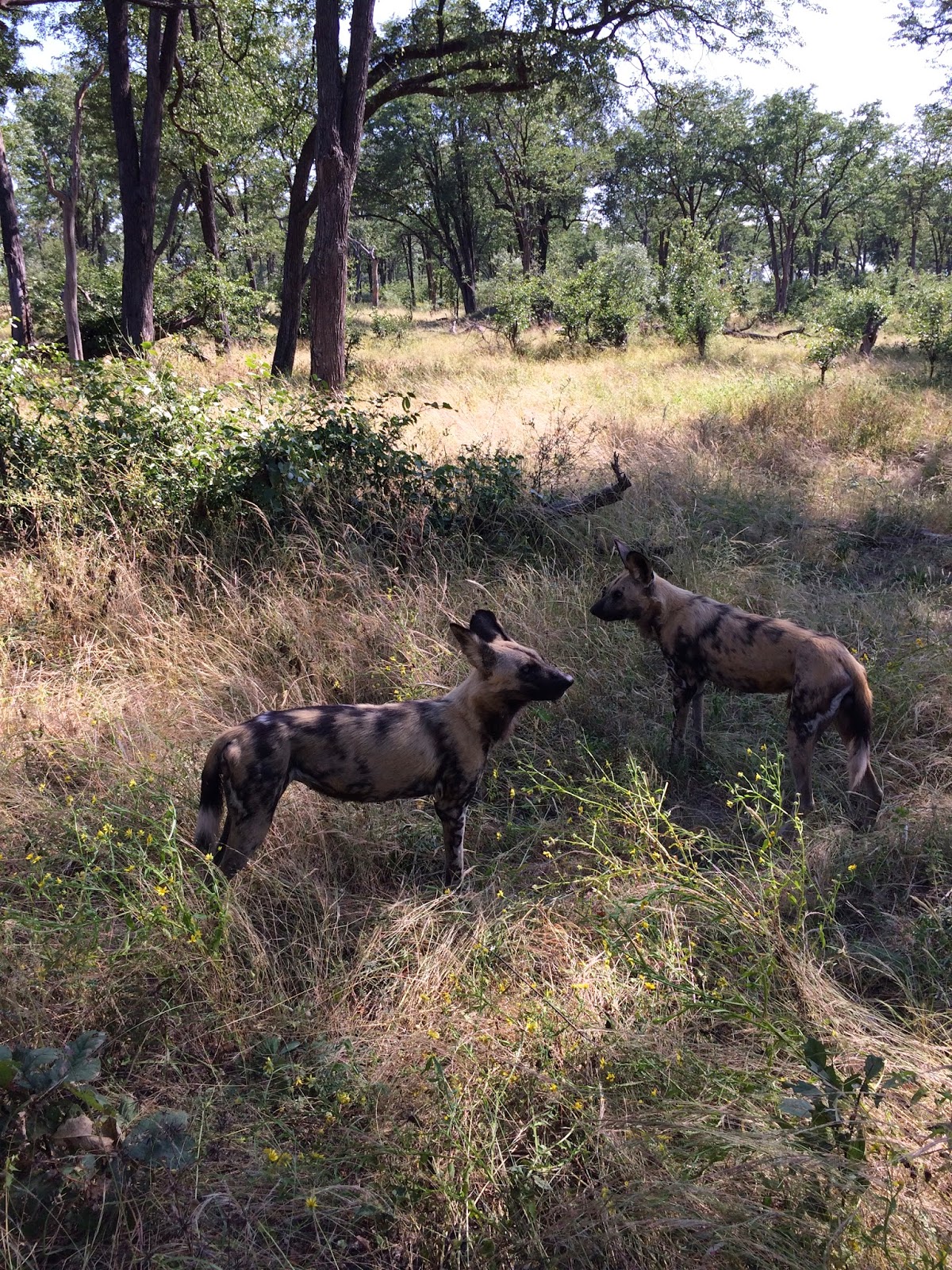 There is an interesting story about these dogs.   Wild dogs live and hunt in packs that have a very strict hierarchical structure.  Each pack has an alpha male and alpha female.  When we came on this pack [after some impressive tracking by the guide, following tracks in the sand or dirt], our guide pointed out the alpha pair.  The male had suffered some sort of really horrible injury to its right eye, and the eyeball was protruding from the socket, almost separated from the skull.  His left eye also seemed somewhat dysfunctional.  A subordinate female started harassing the alpha female, and a fight broke out between the two, with the alpha female biting at her to discipline her.  The guide said it looked as though she was trying to mate with the alpha male [and thus displace the alpha female.]  The subordinate female's mate kept trying to stop her from doing this, interposing himself between her and the alpha female, grabbing her ear in his mouth and pulling her away.  She persisted in going after the alpha female, and her mate kept trying to stop her.  There were five cubs in the pack, and they looked seriously undernourished, as though the pack had not been successful in hunting.  Wild dogs hunt by running down their prey, following them until they weary and can be killed.  As we watched the pack from perhaps ten or fifteen feet away, a brief but very vicious fight broke out involving not just the alpha pair and the challenging pair but most of the adult dogs.  After it stopped, we saw that the subordinate female's mate had suffered a fresh wound on the side of his face and was bleeding.
﻿
When we set out the next morning on a game drive, the guide reported that another Land River had come upon the pack and found that they had killed an eaten an impala, which is not much food for eighteen dogs, but was at least something.  When we found the pack again, more fights broke out, and we saw that one of the other subordinate males had lost part of an ear overnight, suggesting that the fighting been continuous.  All of the guides were puzzled by what was going on, and our guide said they would have to get together, share their observations, and try to piece together a coherent story.  He thought the pack would splinter, since in its present condition it would find it very difficult to function as a coherent effective hunting force.

This was one of several such on-going "story lines" we observed during our safari.
Posted by Robert Paul Wolff at 9:13 AM

Is this a kind of Aesop's fable of the Russia-Ukraine fracas?