Susie and I visited the newly renovated and enlarged Picasso Museum today.  The museum is housed in a lovely old building that has been extensively refurbished, enlarged, and brought up to 2015 standards.  Some years ago, we visited the old Picasso Museum, on the same spot.   Now, I am not much for the visual arts, but there was one moment from that earlier visit that has stayed with me.  As we made our way through the rabbit warren of rooms, the walls crammed with Picasso's works, we took a turn into yet another room and there, on the wall, was a startling painting of Picasso's son, Paul, dressed in traditional Pierrot costume.  The smock sparkled with a blinding absolute white that jumped off the canvas at me.  I can only recall one other art museum experience that has affected me as deeply [coming upon Frans Hals' painting, The Laughing Bohemienne, on a side wall in the Louvre, just hanging among many other paintings as though it was nothing special.]

Here is the painting I saw in the old Picasso Museum: 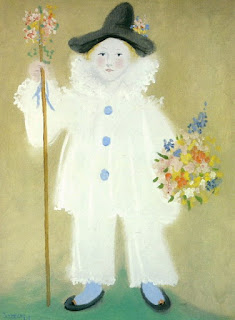 On the second floor of the Picasso Museum [the premier etage, as they call it here], I found Picasso's painting of his son as a harlequin.  I asked one of the many museum guides standing about where the Pierrot canvas was, and she said it was in the basement -- not enough room.  I was very seriously bummed.

But the café was nice.
Posted by Robert Paul Wolff at 7:55 AM

"The smock sparkled with a blinding absolute white that jumped off the canvas at me."

I'm please to know that it was a "sensation" ("La sensation" was Pissarro's key concept, and thus Cèzanne's as well, among others) that was impactful and not an idea. As an atheist and anarchist, Pissarro believed that responding freely to sensations, with no external purpose or instrumental motivation - certainly not narrative, was required by anarchism. Joachim Pissarro, the painter's great-grandson and curator, wrote that, "His [Camile's] art raises our awareness of the fact that a painting need not carry a revolutionary message in order to perform a revolutionary function."

The quote from Joachim Pissarro is quite striking. Compare it with Herbert Marcuse's account of the liberatory function of art, in ONE DIMENSIONAL MAN.

For an interesting view of how things have changed for working people from Marx's time (when shortening the working day was a serious problem) see this story:

The whole thing is very interesting, but especially scroll about 3/4 of the way down, to the story of the man suffering, greatly, under the reign of "dynamic scheduling" at a warehouse. He only wishes he could work as much as he wanted to. But, while perhaps impossible in current American, because of political considerations, the solution to this problem are not in principle hard, and don't require radical changes, just rules about when schedules must be set, about who counts as being "on call", and how such people must be compensated, and so on. People wishing to help the working class are really better off working towards such goals.

More generally, I think it's worth it for people to look at Eduard Bernstein's mostly forgotten _The Preconditions of Socialism_. Not because Bernstein, who had been one of Marx's literary executors, has the magic formula for today, but because it's useful to see the ways that he had noted, as early as the 1910's that many of the economic predictions of Marx had not happened, and that the world had changed in ways Marx had not predicted, and that therefore people wishing to be loyal to the spirit, and not the text, of Marx needed to change, too. Unfortunately, he was more or less run out of the "mainstream" Marxist/socialist movement for this heresy, but a significant part of European social democracy was built along the lines he suggested. For the general moral it is still worth reading.

"Unfortunately, he [Bernstein] was more or less run out of the "mainstream" Marxist/socialist movement for this heresy, but a significant part of European social democracy was built along the lines he suggested. For the general moral it is still worth reading."

Without discussing the merits (or lack thereof) of Bernstein, your interpretation of what happened is rather odd, to put it mildly. Parties like the SPD gradually tended towards reformism and actively expelled communists.

If someone was ran out, it was the communists.

Not only that. The SPD ordered the bloody repression of German communists, anarchists, and even the more radical social democrats in 1919. It was the SPD, under Friedrich Ebert, with the support of the proto-Nazi Freikorps, who saved the day for the German bourgeoisie.

Best Qualified Leads For MCA method has several leading elements needed to modify the MCA Leads Guide to the approaching jobs in the Qualified MCA Leads.