When I went off to Harvard in 1950, my parents and I had an agreement.  They would pay the tuition [$600] and the room and board [roughly the same, depending on which House you ended up in], and I would earn my pocket money by doing odd jobs.  I baby sat [and read Anatole France’s Penguin Island one evening], scrubbed floors, and twice a year inventoried the Robert Hall clothing store [a fabulous job that paid $1.25 an hour.]  I even sold hot dogs one Saturday at a Harvard football game, but since the concession was under the stands, I never actually saw a play.  I wanted to go down to New London to Connecticut College for Women to see Susie as often as I could, so I had precious little to spend on anything else. As a consequence, I never actually bought books in college.  I read them in Lamont Library and took notes.  One of the few books I acquired as an undergraduate was a handsome copy, two volumes in one, of Harry Austryn Wolfson’s magisterial work The Philosophy of Spinoza.  I read it in the library while taking his course my sophomore year, but that year I won the Detur Book Prize for getting good grades and chose Wolfson’s book as my reward.  Years later, I received a fund raising appeal from Harvard to support the Detur Fund, and even though I routinely threw away Harvard's endless appeals, I thought I owed them something and sent along a hundred dollars to the fund.  One result of this undergraduate poverty was that when I started to actually buy books, I grew quite fond of them.

By now, as you will imagine, I have acquired a goodly number of books.  Nothing like so many as some scholars, but enough to fill many running feet of floor to ceiling bookshelves. 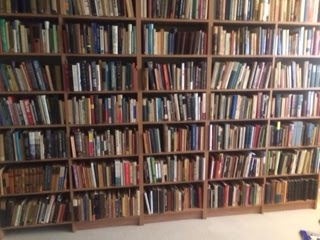 Here is a photo of one stretch of those shelves, to the left and behind my desk in my study.  This morning, I pushed back from my desk and swiveled to look idly at the shelves, and my eye fell on a three volume translation of a minor nineteenth century French novel, Les Mystères de Paris, by Eugene Sue.  This is one of the relatively few books in my collection that I have never actually read.  I bought it because Marx and Engels, in their hilarious juvenile work, The Holy Family, spend a good deal of time tearing it to pieces, and I thought I ought to own it.

Then I began to run my eyes over the shelves to spend some time visiting with old friends.  My favorite book of the entire collection is the stubby fat black-bound edition of Hume’s Treatise with Selby-Bigge’s indispensable and exhaustive notes.  I have a sensuous relationship with books, an antique passion that young people probably cannot comprehend.  The paper of Selby-Bigge’s Treatise is a light cream color with a slightly nubby feel to it.  I am an inveterate marginal commentator of the books I read and the pages of the Treatise absorb just enough of the ink to blur what I write ever so slightly.  My copy has been read and re-read, covered with red and black and blue underlinings and comments, until the binding has fallen off.  My first copy of the Kemp Smith translation of the Critique was a graduation present from my two undergraduate friends and fellow madrigalists, Richard Eder and Michael Jorrin, inscribed “Each even line from Dick, each odd line from Mike.”  When it too fell apart, I had it professionally re-bound, which preserved it but made it hard to open, so I bought a second copy.  When that fell apart, I replaced it with a paperback version, which survives intact.  The original copy is a living record of my struggles with that immortal work.  There are places where I have raised a mystified marginal doubt in one ink, next to which, in different ink, is written “Oh yes, I see now.”  After all these years, I have no idea either what my original puzzlement was or what the later enlightenment consisted in.

And so they march on, shelf after shelf.  Some are presentation copies, such as Barrington Moore’s great work, The Origins of Dictatorship and Democracy.  Others are beaten up second hand copies that I found in the recesses of bookstores, like my very own copy of the Index Librorum Prohibitorum, which, according to the flyleaf notation, I bought in January, 1959.  The Index is the Catholic Church’s official list of books the faithful are not to read.  It is a fascinating document, heavily loaded up with obscure works of deviant theology in Italian that the Vatican priests would have known about.  The only English novel I could find listed is Samuel Richardson’s Pamela, I assume on the theory that if you list the first one, it follows recursively that all the others are included.  My copy came with a paperclipped page of addenda that did not make the edition.  The first item on that list is “Sartre, Jean Paul, Opera Omnia,” which pretty well takes care of him.

These are my friends, my oldest and best friends.  I do not visit them very often, but they are with me always and I know that should I grow lonely, they await me, quite forgiving of my lack of attention.
Posted by Robert Paul Wolff at 6:49 PM

Is your son's middle name in honor of Moore?

(I messed up my link, so will try again)

I understand completely. My rather more modest but still not too shabby library can be found here

These books have traveled all over with me - I have carried many of them up to the 4th floor of my Harlem walk-up on the hottest day of the year when I lived in NY City for a bit, moved them out west to Denver for a while, shuffled them all over Philadelphia, carried some of the oldest from Idaho, took a few to, and a few back, from Russia, and recently moved all of them to Australia, where I must now put them away again. It is, perhaps, a bad habit, but a hard one to break. I am now less of a compulsive buyer than I once was, at least.

Love the photo. What is it about books on a shelf that is so....well, beautiful?

Here's a book story that tickled me. It is Norman Finkelstein (interviewed by Paul Jay) recounting his early days
as a dedicated radical zealot:

FINKELSTEIN:I was a nut. I went to Paris to study. You know what I did? I mean, it's just an embarrassment even to say it now. I spent the whole time in Paris. I read 25 volumes of Lenin. That's what I did. I brought over the collected works, which were not so expensive back then, 'cause they--.
JAY: They were heavy.
FINKELSTEIN: Yeah. I had a roller. It was 55 volumes. I brought over all 55--yes, because for me it was not just--it was an eccentric form of fanaticism. I had to grasp it intellectually, or I thought I was grasping it intellectually because I was reading. In fact, I wasn't grasping it intellectually.

I might add that one fun thing for people who have published books from the site I link to is that you can see how many people on the site have various books of yours. So, Bob's author page is here:

You can see how many people who use this site have each of your various books, and note, for example, that the well-known philosopher Stephen Darwall (Long time professor at Michigan, now at Yale) has 7 of your books. A fun site in general, as well as useful for keeping track of one's library.

When I retired I had to give up my office and its bookshelves and hence consolidate everything into my home bookshelves. Many were duplicates, so that was easy. Some were "I'll read that one day" volumes combined with the new realization that "No, I won't." And the food books needed thinning out along similar lines. I took pictures of the surplus and they were snatched up by colleagues and food people. Here's a sample (it's too late, all gone).
book giveaway pics

Eighteen bags of books on mathematics and technical subjects given away to a local bookseller. In retrospect, earning a Ph.D. in mathematics was a waste of time. I'm still living under an avalanche of books. (No photo available.)